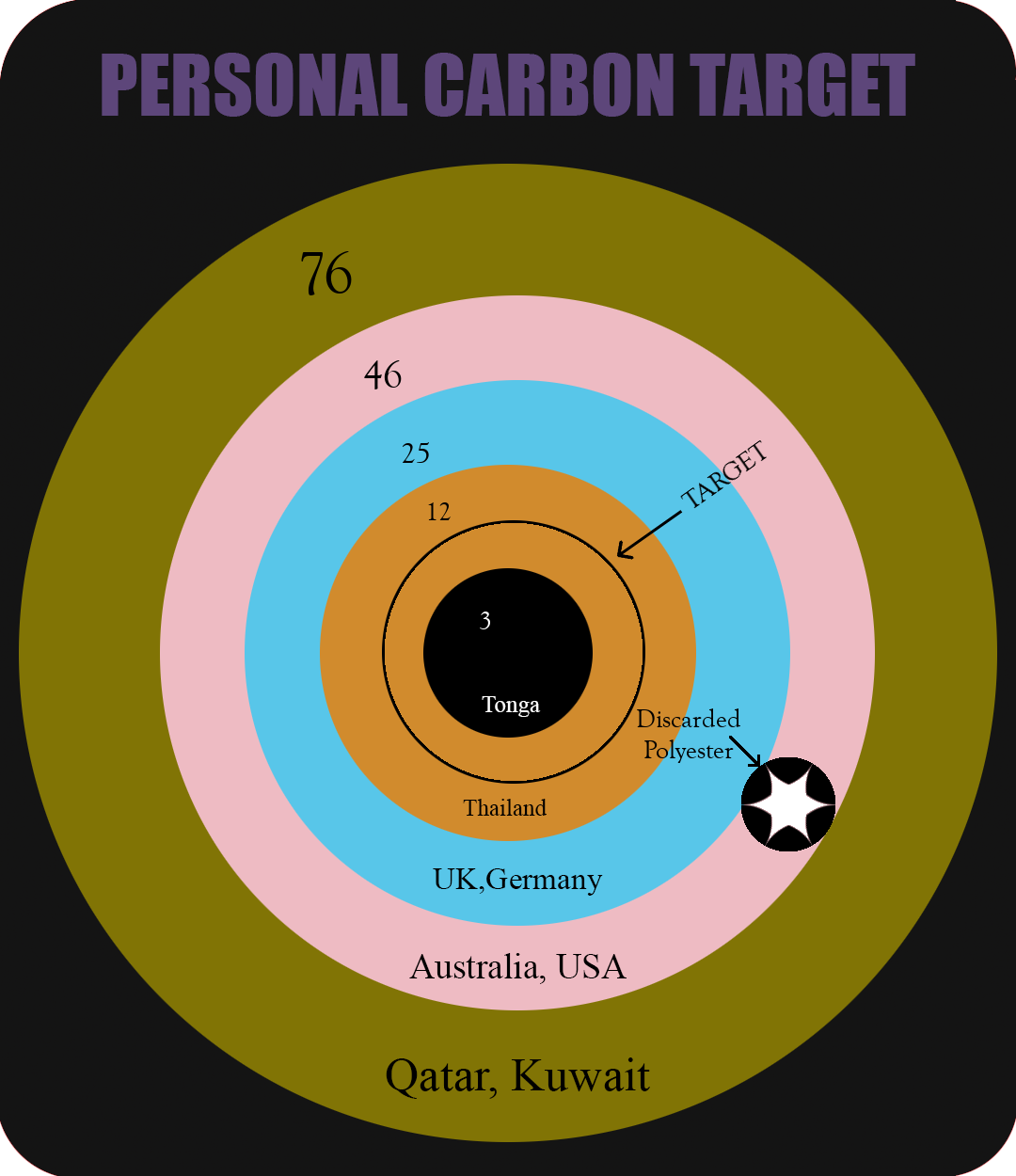 To help visualise the positive impact that a particular action will take on your contribution to climate change, this book employs an original infographic, the Personal carbon target.

The topic is introduced in a humorous way in this 3 minute video.

The base of the target is your per capita share of the greenhouse gases emitted by consumption of goods and services in Australia. That is 16.96 tonnes of CO2e per year or 46kg/d. You can examine the calculations behind that in the Ready Reckoner. That is commonly known as your carbon footprint (see the Glossary).

The per capita footprint of various countries is discussed in the article from the introduction of the book.

The idea of achieving a personal two-tonne target is based on the Paris agreement to keep global heating below two degrees. If our body temperature increases by two degrees we have a serious fever; any higher and we are in severe risk of death. Two degrees is now argued by many people as being unachievable, but all Federal government documents indicate a commitment to maintain this as the goal.

In 2014, the Australian Climate Change Authority indicated that a global target of 34Gt per year was the basis on which government policy should be formed, but up-to-date science using the same method indicates that this has now been reduced to 15Gt per year. We wasted six years emitting increased amounts of carbon, thereby increasing the sacrifices now required to meet the target.

With eight billion people on the planet that is a personal target of slightly less than two tonnes per year.

Clearly, we cannot do everything ourselves; we need governments to set energy policy and provide cheap efficient public transport, but it is important that we understand what our impact is in the overall context of limiting global heating. It is also important to understand why those most worried about climate chaos are calling for radical changes to energy policy and economic sacrifice, and those more worried about personal comfort advocate tolerating adaptation to larger temperature increases.

The impact of each tip is represented as a hole, shot in the Personal carbon target. The size of the hole represents the saving made if the average Australian in the ‘typical’ Australian household as defined in the ready reckoner, were to follow the advice of the tip.

Replacing all your electricity consumption with power generated by solar photovoltaic cells installed on your roof, for example, would create a hole almost one sixth the size of the target. It eliminates nearly all the emissions from electricity use, which is over half of the emissions generated in the home, but that is only one third of the total household footprint. The panels, invertor and battery also add slightly to the footprint of the things you buy.

Some ‘holes’ will overlap. If I buy some rooftop solar and one energy-efficient electric heater at the same time, I will reduce my carbon footprint more than if I only did one tip, but not as much as I would think if I added together the maximum savings available from each tip. The ‘holes’ in the target overlap because some of the electricity savings from the heater involve renewable energy and some do not.

The typical or average household

When considering the impact that a tip would have on your life, it is important to think about the size of your carbon target compared to the average and the ways in which you differ from the typical Australian home. For example, if you already have rooftop photovoltaic panels, replacing your electric hot water service with a solar one is not going to have a great impact.

The location of the holes on the target is a visual reminder that only one third of the emissions represented by the target are emitted in the home; roughly another third is due to food and the final third due to all the other products. The impact of your food choices, for example, are all grouped together because those rips reduce the agricultural emissions released on your behalf and have very little impact on the household emissions.

The assumptions we make

Not only are the visualisations representative of the statistically typical home, they make assumptions about our behaviour.

The impact of Tip 1, An empty room does not need a light, assumes that we leave the lights on when we are not in the room about one sixth of the time (say one hour of the six hours we need the lights on). That is generous; we might behave worse than that, but we do not have comprehensive data on all Australian’s light-switching habits and we do not want to overestimate the impact of any particular tip. Based on that assumption, turning them off every time we leave the room would save one sixth of the energy we use in lighting, therefore 0.16 (one sixth) x 0.06 (lighting as a fraction of electricity) x 0.23 (electricity as percentage of footprint) x 46kg/day or 120g per day.

Obviously we cannot detail the calculations behind every tip in this much detail, but the Ready Reckoner gives you the assumptions on which we base those calculations.